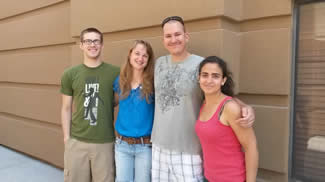 PECAN: Fixed PISA 4, and back to the Mobile Team

After spending a week in Colby, KS, me team rotated to Kearney, Nebraska. I had been to Kearney once before (the night before the tornadoes in Rozel, Kansas back in 2013,) but I didn’t remember very much of it. The hotel we stayed in, the Windgate, was actually very nice.

But overall, the week in Kearney was not a very good one. It started out well, with the Blackhawks winning the Stanley Cup. But it quickly went down hill from there. My grandmother passed away the day after the Stanley Cup victory, and a couple days after that my mother fell and broke her hip. Those events, combined with the lack of missions made the week pretty miserable for me. We did have an MCS roll through Minden (where the actual FP4 site was located,) one night when I was working, which was interesting to watch.

Sunday, our last day in Kearney, we did have a mission. I pulled the late shift, and so Abbi and I did not get back to the hotel until like at 5 AM. I stayed up for a while and packed, and grabbed some breakfast. Then, I got a few hours of sleep and then our team said our goodbyes. Abbi and Lucy were returning home, and Jon was moving to a different team. I, on the other hand, was to return to Hays to lead the mobile team again.

Luckily for me, Monday was a down day. So I was able to catch up on some sleep. I also got the opportunity to meet a couple of my new team mates. Tuesday was the start of a road trip. Before the weather briefing, I thought that day would be a down day. Instead, they told us to pack for two nights, and be ready to leave by four. We had to stop by the warehouse to restock then MGAUS truck with helium, balloons, and radiosondes, and then we hit the road at about 4:30.

Our target was Beatrice, Nebraska. The mission was a CI (Convective Initiation,) one, though there wasn’t any near us. So, it being the first mission for half my team, we all stayed up and launched the balloons together. After the mission was complete, we tried to find a hotel in Beatrice, which turned out to be a challenge. We tried several different hotels. Eventually, we did get two rooms. They were literally the last two hotel rooms in Beatrice.

The next morning we got up, and headed over to Walmart to hang out until we had a destination. PECAN did something a bit unorthodox that day, we targeted an area outside of the predetermined PECAN Domain. The target area for MP4 was Osceola, Iowa, which is south of Des Moines.

So we made the long drive, and got set up. This IOP was an MCS mission; a “once in a PECAN type event,” as it was called. On radar we could see the MCS forming to our north. At first it was moving to the east-southeast. But then, it suddenly gained strength and headed straight for us. We launched our radiosondes and were treated to an amazing display as the MCS beared down on us.

Eventually, the Ops Center told me the was golf ball sized hail nearby. So, we bailed to the south to get out of the way. We waited for the storm to move past, and then returned to our previous position and launched two more radiosondes. The Ops Center and the Mission Scientist were very happy with our work, as we had one of the best positions and some of the best data that night. We called it a night and crashed at a hotel.

That night, we had been told that Thursday would be a down day for us. Then, on Thursday, we were told there would be an optional mission; which we said we would be ok with doing, we just needed more helium. Then, Thursday became an official mission, studying bores. We stopped in Topeka, Kansas while we waited for a destination.

First, we drove to Junction City to meet up with the MIPS crew, who would lend us one of their helium tanks. Then, we made a sprint to Emporia, Kansas, where we would be launching that night. As it turned out, there were at least seven bores that night, and we got some very good data as a couple of them passed over us. The Ops Center was again very pleased with us. After the mission, we went to a hotel and crashed for a few hours.

After we returned to Hays, it became apparent that mother nature had decided to no longer cooperate with us. We’ve had a string of down days, no end in sight. I’ve passed the time by hitting up the local bars and playing pool with Ren, as well as watching Cubs games.

Tomorrow (assuming there is not a mission,) my team will be rotating back to Colby, Kansas. Again, we’ll be there for about a week before rotating to Kearney, Nebraska for the final week of PECAN. Then, I will drive home.