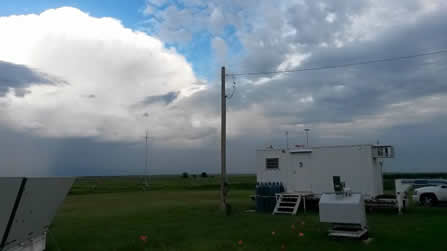 So, the day after the night with all the lightning was IOP-5. I started out as a Low Level Jet mission, and we were originally told to head to the same spot we were at on Tuesday, which was northeast of Otisberg, Kansas. Along the way, we stopped in La Crosse for gas. While we were there, we got the word that the LLJ mission was scrubbed, and that we would be doing a bore mission instead. While we waited for our destination, I bought a pizza to eat in our Mobile PISA.

We got our marching orders, and they were to go to Penokee, Kansas; which is a little ways west of Hill City. I think the plan was to launch four soundings that night at 00z, 03z, 06z and 09z. But, since we didn’t get out destination until about 00z, we obviously didn’t launch one then. As we set up the vehicle, a storm to the west of us a ways became tornado warned. As the night went on, there were a few tornado warnings, and apparently one or two stove pipe tornadoes. But we never saw any of that.After we launched our 03z sounding, we decided to split the team; half would stay up and do the 06z sounding, the other half would try to get some sleep and then do the last sounding at 09z. Abbi and I elected to try to sleep. Sleeping in the back of a Trailblazer proved to be too difficult for me. But fortunately, it didn’t matter. The op was cancelled before the 06z sounding, and we all went home.

The next day was a hard down day, as well as our moving day. During the day, we did laundry; cleaning all our bed sheets and towels. Then, at around 6 PM, we made the drive to Colby; our new home for a week. Since we had the night off, we went to a place called Twisters for dinner, drinks, and so I could watch the Blackhawks game.

The following day, Sunday, we had a little orientation with Bill on the Fixed PISA-5 site. We did have an IOP that night, but I do not remember what the mission was. Since that first night, we have been running split shifts. Two of us have been taking the first two or three soundings, and the other two have been taking the last one or two. It hasn’t been bad so far, although Jon and I did have to launch a sounding at 3:30 AM one night. We didn’t end up getting back to the hotel until after 5:00 AM, when the sky was starting to get light.Being at a fixed site is a bit more easy going than being on the mobile team. We can sleep in pretty much as late as we want to. We don’t have to drive all over Kansas. We’ve had a couple of days off here, which has been nice. And since we work on shifts, we usually only end up working for a few hours each day.

This weekend we should be moving to Kearney, Nebraska, where we will be working on the other NCAR fixed site, FP-4. There we will remain for about a week. After that, some of the team should be leaving, and new people will be coming in to replace them. And from there we will be on the mobile team in Hays again.