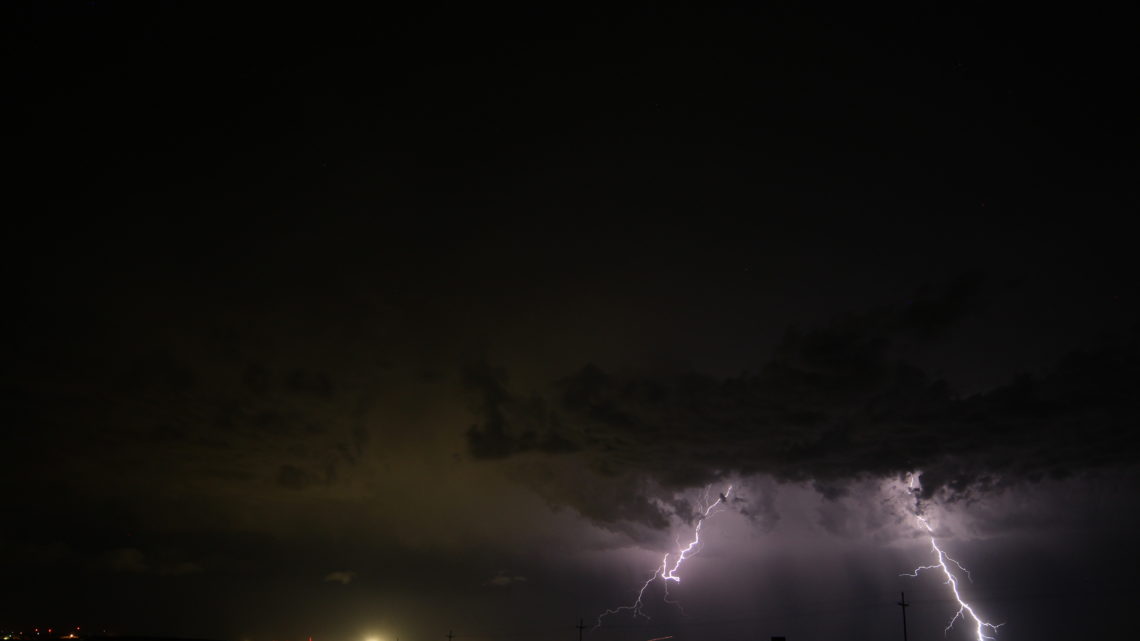 It’s been a busy few days, and I haven’t had much time to blog.

So Tuesday was IOP-2. IOP-2 was a Low Level Jet mission. We were given some coordinates, and sent on our way. The coordinates took us to a little ways northeast of Otisberg, Kansas. On this mission, Abbi, Lucy, Jon and I were on our own for the most part. The MSS truck was having trouble with its lights, and so it could not travel at night time. So the MSS sat this one out. Once we got to our coordinates, we probed around for a suitable location.

We found a little clearing off a dirt road near some big oil tank things. So we got the truck set up. The plan was to launch a sounding every 90 minutes. During the first balloon launch, as we were filling the balloon we accidently put a hole in the side, and had to fill another one instead. The other launches went off with out a hitch. After we launched our final balloon, and waiting for it to record its data, we headed for home.

IOP-3 was an MCS mission. Our initial target area was Concordia, Kansas. The PECAN armada left early, and then set up shop in the parking lot of a Walmart in Concordia. After that, things did not go quite as planned. One beautiful looking supercell fired up to the southwest of Hays. A bit later on, some more storms fired up to the northwest of Hays, and I believe dropped a tornado. Eventually we got our target coordinates, near Olsberg, Kansas.

Unfortunately, we did not get to our target location until after dark. To make things even more creepy, we set up shop in front of a grave yard. So, we set up the truck, as well as the MSS (which was fixed at this point.) We launched our soundings as planned. Unfortunately, the MCS did not really effect our location. Although we could see lightning flashes all around, we never really got anything. The MCS went north, instead of south as planned. We spent the night in Manhatten, Kansas.IOP-4 was a bore mission. We left Manhatten, and went west towards Concordia, Kansas. Along the way, we were diverted towards Smith Center, Kansas. A bit later on, we were again diverted to Osborne, Kansas. When we got to Osborne, we stopped to gas up and get food. While we were there, we were given our final target coordinates; a point 15 miles south of Hays.

So we made the drive south and west towards our target. Along the way, we watched some impressive lightning. Finally, we reached our target location; again after dark. We plotting around some dirt roads for a while, we found a wide part of the road to set up on. We ended up only launching two soundings that night. But we got to watch an amazing lightning show, and I got a lot of really great lighting photographs.