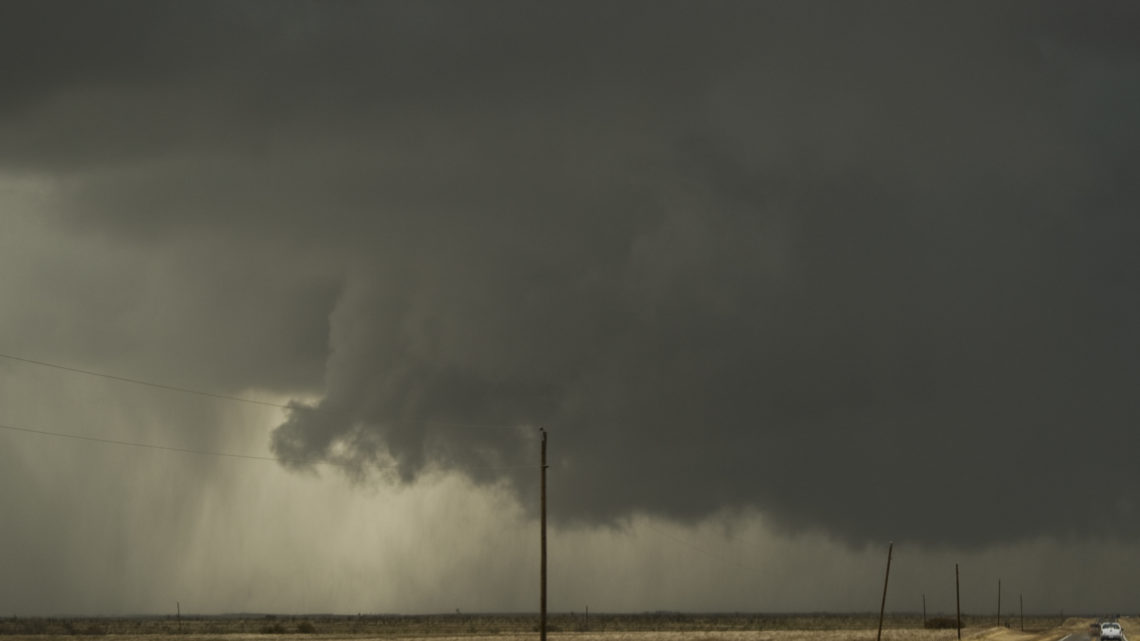 Alyson and I left Norman at around 10 AM, heading to our initial target area of Vernon, TX. One of my biggest concerns for this day was the timing of thunderstorm initiation. It the storms didn’t fire up early enough, it would be dark before we saw anything. Luckily, this did not happen. By the time we got to Frederick, OK, towers were already going up to our west in the Texas panhandle.

At that point, I did something I promised myself I would not do. I got suckered and went for the first storms that fired up. Of all the storms that fired up, two looked the best; one north of Childress, and the other passing through Paducah. The Childress storm was already north of us, and had many storm chasers on it already; as was evident by all the spotter network icons heading for it. We decided to go for the Paducah storm. While not looking as favorable as the Childress storm, it was closer and had less chasers on it.

As we approached the storm, it did start to look more and more favorable for tornado development. However, by the time we got to it, it began to fall apart and become more linear on radar. Alyson and I were about to give up on it when we spotted an interesting looking lowering. This lowering eventually became a rotating wall cloud. We stuck with the storm for a little bit, before giving up on it.

At that same time, the storm that developed near Vernon and was moving towards Frederick developed a hook. We decided to book it east and try to intercept that storm. It was here we made a mistake. We wanted to get in front of the storm by driving through it, but ahead of the hail core. Instead we should have driven towards the hook, let it pass, and then continued east. Because of this, we probably missed some of the larger tornadoes.

But eventually we did this anyway, although further north near Snyder. We had intended to pass through ahead of the storm, but got slowed down by police blocking the road. We then pretty much followed behind the police as they let us inch forward every now and then, and eventually passed through the back of the hook. Once we cleared the rain, we could a lot of rotation and a funnel trying to touch down.

At one point, when the police stopped ahead of us, a tiny, needle-like funnel came down, and we believe it touched down briefly. After it lifted, and the police allowed us forward, we continued chasing after the storm; which continued to try to drop a funnel.

Eventually, we reached the Wichita mountains. At one point, Alyson pointed out what looked like the side of a large tornado partially hidden behind one of the mountains. We were not sure at the time, but later, upon viewing footage shot by a Channel 9 News’ helicopter, concluded this was in fact a tornado.

Shortly after that, we fell behind the storm, as well as long our internet connection. As it was starting to get dark, we decided to call the chase for the day; satisfied.

Some leasons learned from this chase are as follows:

1. Do not get suckered by the first storm that fires.

2. I need to stick to my guns/initial target area.

3. Do not try to out run the tornado to get in front. Instead, let it pass, and get right next to it.

Had we gone to Vernon, TX like originally planned we would have been in perfect position for the tornadic supercell. But overall, Alyson and I both were pleased with the storm chase. It was both of our first tornadoes.