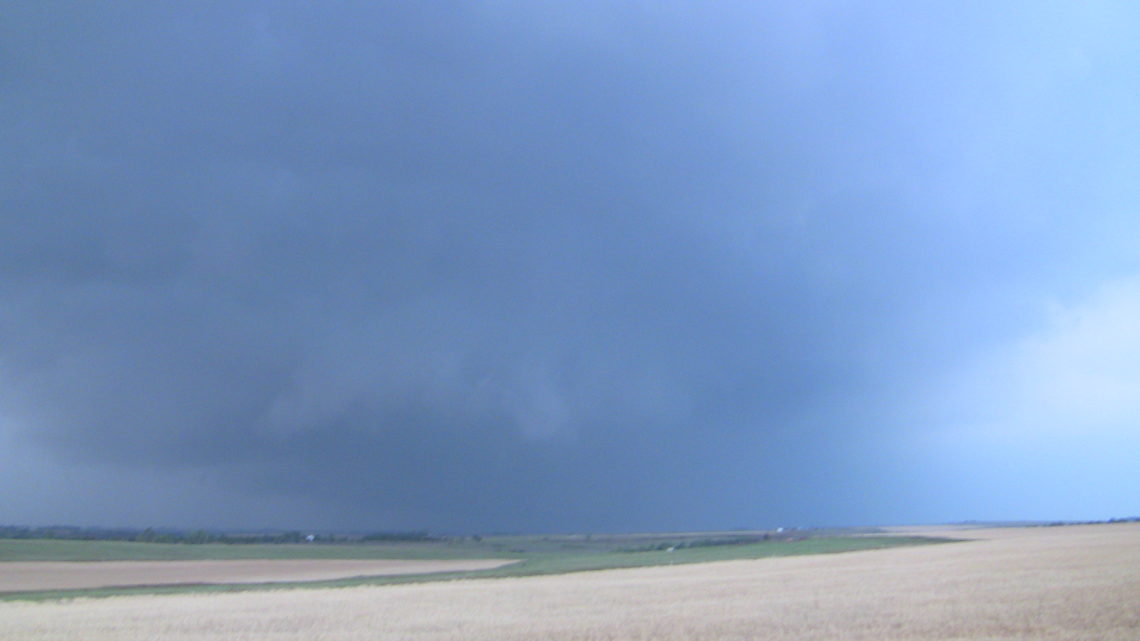 So I started my chase day a little after that PDS Tornado Watch was issued. I jumped in my car and left Norman, heading towards Chickasha. Storms had already started firing in the west before I left, and I decided to continue further west from Chickasha to Anadarko. When I got there, I pulled into an empty parking lot and paused for a few minutes. The more northern storms in OK were starting to look good, but were far away enough that I didn’t think I would be able to catch them. The southern storms, which I could catch, were not yet looking very good. So I decided to wait for a little bit and allow them to develop more.

Eventually, the southern most storm began to intensify pretty quickly. I jumped back on the road, heading towards Fort Cobb. From there, I went north, and then west, and got into position right near the hook. After finding a good place to pull over, I managed to take a few pictures of a wall cloud. After that, I jumped back on the road, heading east and north after the storm.

It was around the time that I started having internet connection problems. So I chased after the storm visually. However, I couldn’t catch up and get ahead of the storm. Finally, when I got near Oklahoma City, I got my internet connection back. From there I tried heading north towards Piedmont to get closer to the storm. However, state troopers had the roads going that way blocked off.

Also at that time, I noticed that a tornado warned storm heading towards Norman. So I headed back south as fast as I could, despite the traffic. I managed to make it back to Norman ahead of the two tornado warned storms heading in that direction. One was heading north of Norman, towards Moore, the other was heading south. At the time, the Moore tornado was looking better, so I found a good place to watch at the airport on the north side of Norman. There, I encountered strong winds, frequent lightning, and some golf ball sized hail.

Eventually, it looked like the Moore tornado had weakened significantly. I couldn’t see anything, so if there was one, it was probably rain wrapped. At that point I started heading south towards the southern tornado, which was looking better at that point. I was pretty much on the phone constantly with my girlfriend, who was taking shelter at a elementary school. She told me that people were saying that the Lloyd Noble Center had been hit, as had the Weather Center. So I headed in that direction.

When I got down that way, I found everything to be fine; no damage. I did see some debris up in the air, however. After making a quick lap around eastern Norman, I found no damage. After that, I stopped at the Weather Center and talked to some people up in the observation deck. They mentioned that had see a brief rope tornado.

Needless to say, today was extremely frustrating. I was very close all day long, but no cigar.