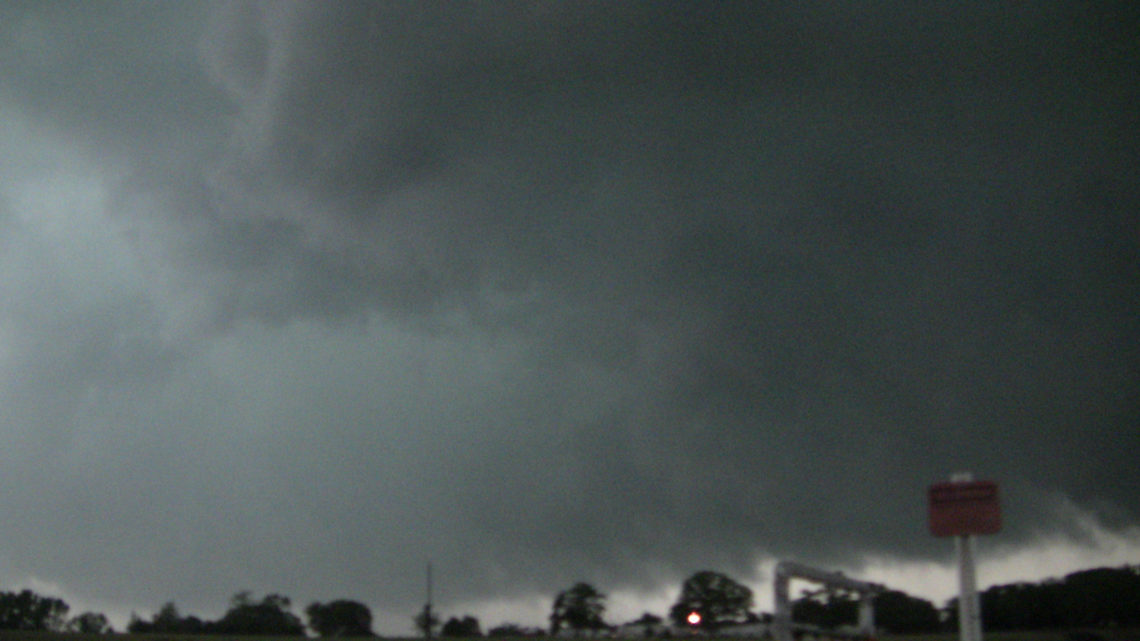 I started out the day targeting Paris, TX. My original intention was to get to Paris, adjust in any direction that I needed to, and just wait for the storms to come to me. I did get a bit of a late start; I didn’t get on the road until about 12:30. I flew south as fast as I could, but by the time I got to Ardmore, OK, there was already a PDS Tornado Watch in effect for much of northeastern Texas.

After gasing up and grabbing a gas station burrito for lunch in Ardmore, I jumped back on the road and really floored it towards my target area. Along the way, storms started firing up. One in particular really exploded, and not much longer after I made it into Texas it became tornado warned. I decided to try to get in position to intercept that storm. I shifted my target area to Canton, TX, a town in the path of the storm. Because of traffic, as well as just how far I was from the storm, I had to shift my target area east, and then south a couple more times. Finally, I settled on Lindale, TX.

Around 5:30 PM, I arrived in Lindale, head of the storm. At that point, the storm looked significantly weaker on radar, and I lost hope of seeing anything in it. I gased up in Lindale, and decided to head south and then west and try to catch the next storms in the line. Fortunately for me, rush hour traffic and a couple of missed turns slowed me down; for the next time I looked at the radar the storm had recycled and now had a couplet again.

I turned around and headed back north, and then northwest towards the storm. The skies grew darker and darker as I drew nearer to the storm; and the sky was filled with violent, close lightning strikes. As I rounded a curve half way between Mt Sylvan and Carroll, I saw a wall cloud directly ahead of me. I decided it was unsafe to keep going on that grow towards a potential tornado, and stopped on a small side road to observe the storm. Unfortunately for this part of the country, there were many, many trees, and it was hard to see very far.

After photographing and video taping the storm for a little bit, I just back on the road to get back into position. Going further north on the road I had stopped on, I passed a tree that had recently fallen over, presumably from a lightning strike. I trailed the storm to the northeast on back roads, eventually turning on to a small road half way between Lindale and Hawkins.

After slowly trying to get my car past a fierce guard dog that was blocking my path, I moved a bit further south on the road and stopped in a clearing. I watched the skies to my northeast, and noted some people who lived nearby out watching the storm as well.

All of a sudden, the wind picked up violently, being sucked to my west. I saw the people outside bolt to safety, so I figured something was close. I drove further down the road to the south, then turned around. At first I didn’t see anything, so I figured maybe it was just the rear flank downdraft I had experienced. I pulled slowly back up the road to the north. Then, as I looked to my left, I saw a huge lowering not far from me, very close to the ground. The wind was going crazy at that point.

My first instinct was to grab my camera. But then I thought better of it and decided to flee to safety. I floored it up the road to the north, and jumped on the next road and headed east. I drove as fast as I safely could to get ahead of what I assume was a tornado touching down.

I came to a stop a little ways away where I saw some other storm chasers parked. I got out and talked to them, and shared my experience with them. They related that they had saw some clouds come together and rotate violently and start to lower. After conferring with them, me and another guy decided to team up and head to the northeast after the storm.

A little while after that, the storm chaser following me, a man named Wesley, informed me that a tornado had touched down in Hawkins, a town to the northeast of where I had seen the funnel/developing tornado. We continued to chase the storm to the northeast, seeing very little but heavy rain and crazy lightning. Eventually, sometime after 7 PM, I decided it was time to give up on the storm, and start heading for home.